Article about us on the magazine Row360 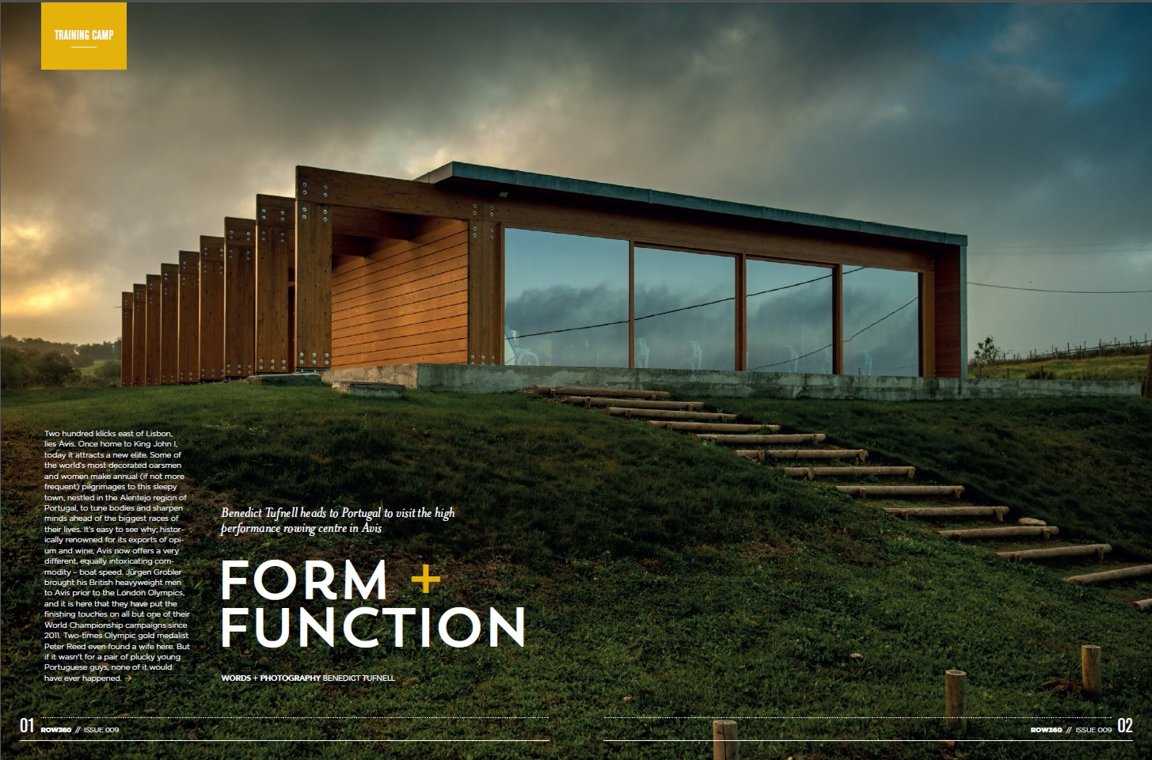 Two hundred klicks east of Lisbon, lies Avis. Once home to King John I, today it attracts a new elite. Some of the world’s most decorated oarsmen and women make annual (if not more frequent) pilgrimages to this sleepy town, nestled in the Alentejo region of Portugal, to tune bodies and sharpen minds ahead of the biggest races of their lives. It’s easy to see why; histor­ically renowned for its exports of opi­um and wine, Avis now offers a very different, equally intoxicating com­modity – boat speed. Jürgen Grobler brought his British heavyweight men to Avis prior to the London Olympics, and it is here that they have put the finishing touches on all but one of their World Championship campaigns since 2011. Two-times Olympic gold medalist Peter Reed even found a wife here. But if it wasn't for a pair of plucky young Portuguese guys, none of it would have ever happened. 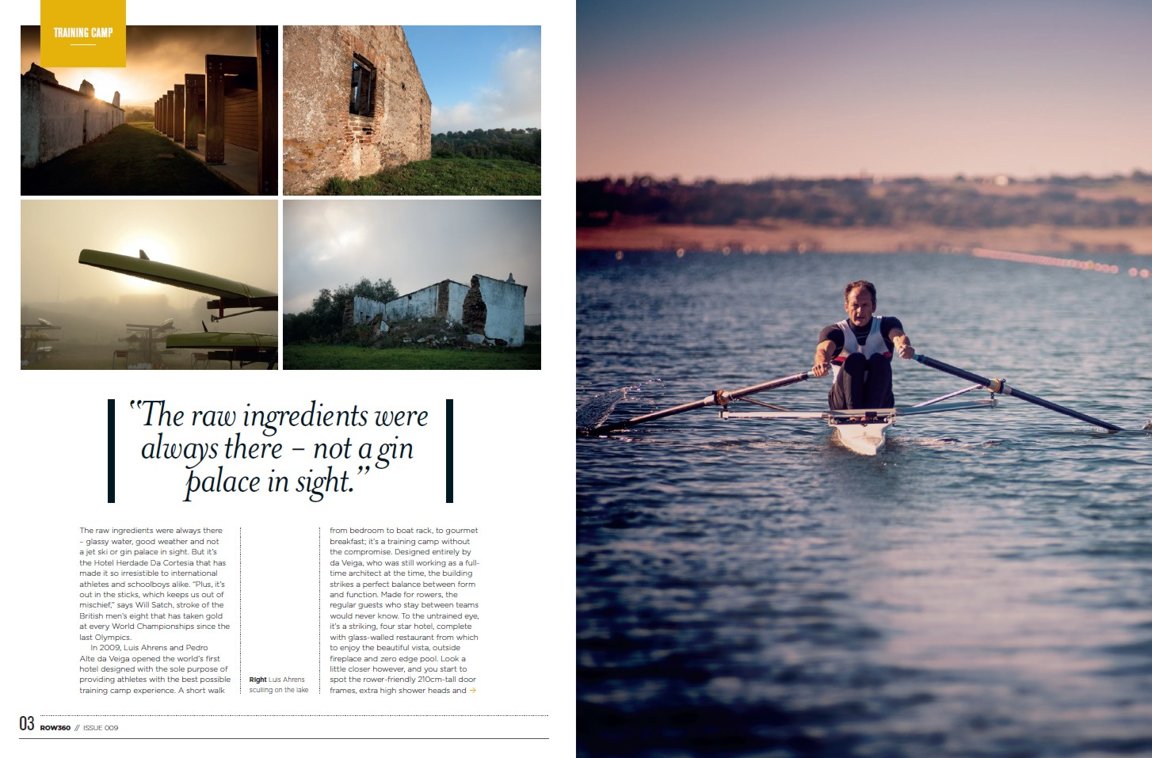 The raw ingredients were always there – glassy water, good weather and not a jet ski or gin palace in sight. But it’s the Hotel Herdade Da Cortesia that has made it so irresistible to international athletes and schoolboys alike. “Plus, it’s out in the sticks, which keeps us out of mischief,” says Will Satch, stroke of the British men’s eight that has taken gold at every World Championships since the last Olympics.

In 2009, Luis Ahrens and Pedro Alte da Veiga opened the world’s first hotel designed with the sole purpose of providing athletes with the best possible training camp experience. A short walk from bedroom to boat rack, to gourmet breakfast; it’s a training camp without the compromise. Designed entirely by da Veiga, who was still working as a full-time architect at the time, the building strikes a perfect balance between form and function. Made for rowers, the regular guests who stay between teams would never know. To the untrained eye, it’s a striking, four star hotel, complete with glass-walled restaurant from which to enjoy the beautiful vista, outside fireplace and zero edge pool. Look a little closer however, and you start to spot the rower-friendly 210cm-tall door frames, extra high shower heads and beds long enough to accommodate even Mo Sbihi. When it came to design­ing the gym, Luis and Pedro made a trip to the state-of-the-art strength and conditioning facilities used by the British team at Bisham Abbey and Caversham to ensure their own would meet the needs of a world-beating heavyweight rowing team. 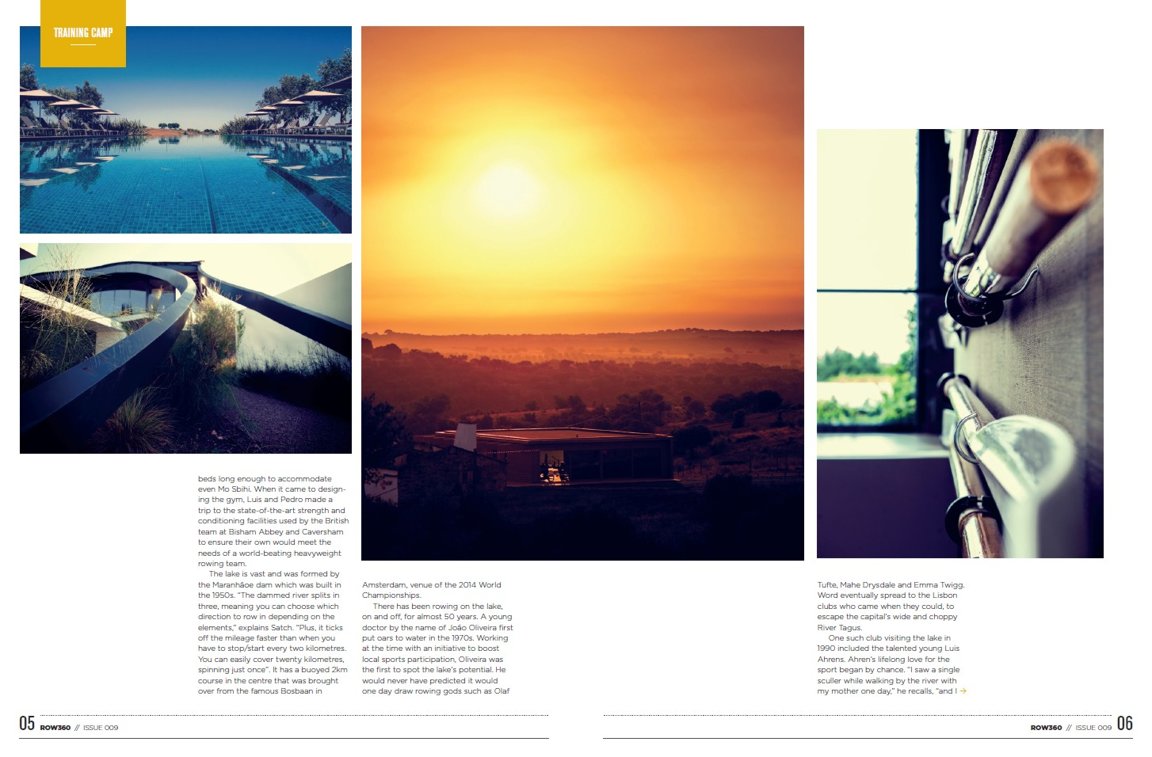 The lake is vast and was formed by the Maranhãoe dam which was built in the 1950s. “The dammed river splits in three, meaning you can choose which direction to row in depending on the elements,” explains Satch. “Plus, it ticks off the mileage faster than when you have to stop/start every two kilometres. You can easily cover twenty kilometres, spinning just once”. It has a buoyed 2km course in the centre that was brought over from the famous Bosbaan in Amsterdam, venue of the 2014 World Championships.

There has been rowing on the lake, on and off, for almost 50 years. A young doctor by the name of João Oliveira first put oars to water in the 1970s. Working at the time with an initiative to boost local sports participation, Oliveira was the first to spot the lake’s potential. He would never have predicted it would one day draw rowing gods such as Olaf Tufte, Mahe Drysdale and Emma Twigg. Word eventually spread to the Lisbon clubs who came when they could, to escape the capital’s wide and choppy River Tagus.

One such club visiting the lake in 1990 included the talented young Luis Ahrens. Ahren’s lifelong love for the sport began by chance. “I saw a single sculler while walking by the river with my mother one day,” he recalls, “and I decided I wanted to do that. I signed up to the first rowing team I found. I wanted to get fit enough to be a rally driver”. His career however soon saw Ahrens rise to the national rowing team, competing internationally between 1992 and 2007. Today, he sits as president of the Portuguese Rowing Federation.

“My first time here was with my club in 1990,” he explains, “but the idea to build something for rowers came in 1997”. The catalyst was a conversation at a wedding in 2004 where Ahrens bumped into de Veiga, an architect at the time and brother-in-law to his ex-wife. “We were just chatting, talking about life,” explains de Veiga, “when Luis told me about his idea to make a place especially for rowers to come to. Two days later, I came to visit here. I trusted him”. 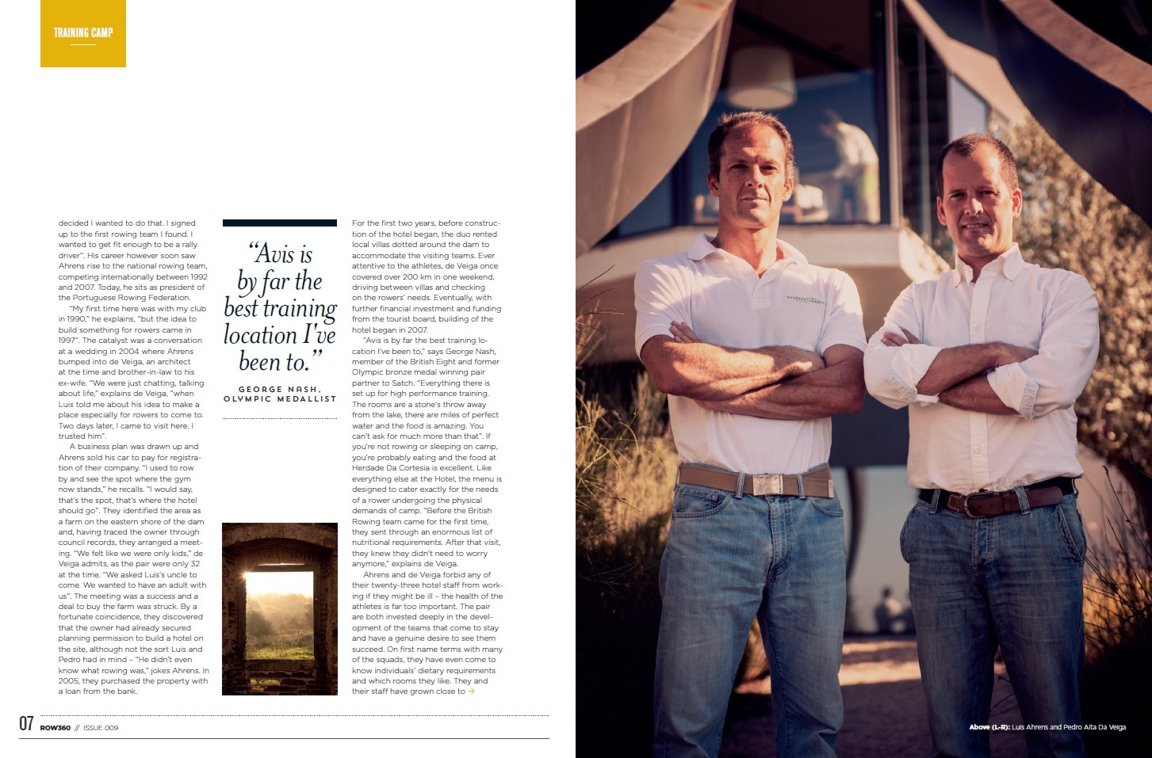 A business plan was drawn up and Ahrens sold his car to pay for registra­tion of their company. “I used to row by and see the spot where the gym now stands,” he recalls. “I would say, that’s the spot, that’s where the hotel should go”. They identified the area as a farm on the eastern shore of the dam and, having traced the owner through council records, they arranged a meet­ing. “We felt like we were only kids,” de Veiga admits, as the pair were only 32 at the time. “We asked Luis’s uncle to come. We wanted to have an adult with us”. The meeting was a success and a deal to buy the farm was struck. By a fortunate coincidence, they discovered that the owner had already secured planning permission to build a hotel on the site, although not the sort Luis and Pedro had in mind – “He didn’t even know what rowing was,” jokes Ahrens. In 2005, they purchased the property with a loan from the bank.

For the first two years, before construc­tion of the hotel began, the duo rented local villas dotted around the dam to accommodate the visiting teams. Ever attentive to the athletes, de Veiga once covered over 200 km in one weekend, driving between villas and checking on the rowers’ needs. Eventually, with further financial investment and funding from the tourist board, building of the hotel began in 2007.

“Avis is by far the best training lo­cation I've been to,” says George Nash, member of the British Eight and former Olympic bronze medal winning pair partner to Satch. “Everything there is set up for high performance training. The rooms are a stone's throw away from the lake, there are miles of perfect water and the food is amazing. You can’t ask for much more than that”. If you’re not rowing or sleeping on camp, you’re probably eating and the food at Herdade Da Cortesia is excellent. Like everything else at the Hotel, the menu is designed to cater exactly for the needs of a rower undergoing the physical demands of camp. “Before the British Rowing team came for the first time, they sent through an enormous list of nutritional requirements. After that visit, they knew they didn't need to worry anymore,” explains de Veiga.

Ahrens and de Veiga forbid any of their twenty-three hotel staff from work­ing if they might be ill – the health of the athletes is far too important. The pair are both invested deeply in the devel­opment of the teams that come to stay and have a genuine desire to see them succeed. On first name terms with many of the squads, they have even come to know individuals’ dietary requirements and which rooms they like. They and their staff have grown close to

teams that come time and again. “To us, Luis and Pedro are like friends,” says Satch. “It’s always good to see them”. They fondly recount stories of surfing with Olympians and evenings spent chatting into the small hours with Grob­ler over a bottle of red wine. This year, they were even invited to the annual GB team dinner in London. 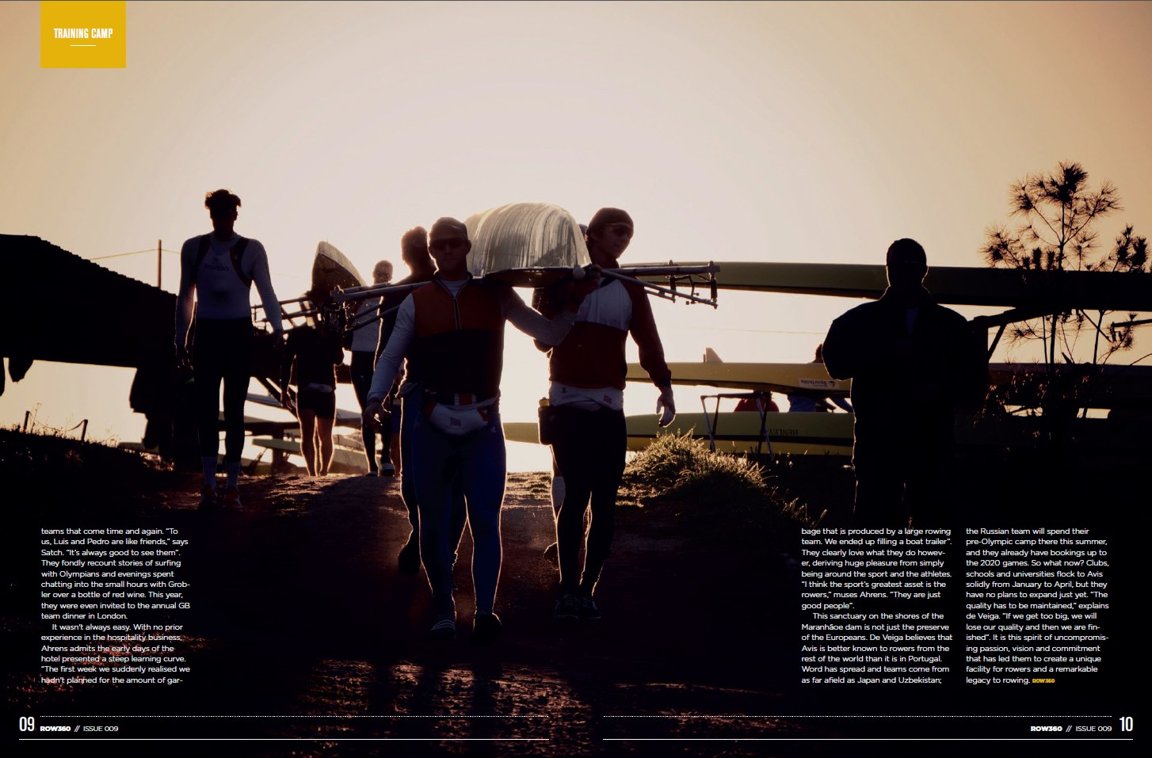 It wasn't always easy. With no prior experience in the hospitality business, Ahrens admits the early days of the hotel presented a steep learning curve. “The first week we suddenly realised we hadn't planned for the amount of gar­

bage that is produced by a large rowing team. We ended up filling a boat trailer”. They clearly love what they do howev­er, deriving huge pleasure from simply being around the sport and the athletes. “I think the sport’s greatest asset is the rowers,” muses Ahrens. “They are just good people”.

This sanctuary on the shores of the Maranhãoe dam is not just the preserve of the Europeans. De Veiga believes that Avis is better known to rowers from the rest of the world than it is in Portugal. Word has spread and teams come from as far afield as Japan and Uzbekistan; the Russian team will spend their pre-Olympic camp there this summer, and they already have bookings up to the 2020 games. So what now? Clubs, schools and universities flock to Avis solidly from January to April, but they have no plans to expand just yet. “The quality has to be maintained,” explains de Veiga. “If we get too big, we will lose our quality and then we are fin­ished”. It is this spirit of uncompromis­ing passion, vision and commitment that has led them to create a unique facility for rowers and a remarkable legacy to rowing. ROW360 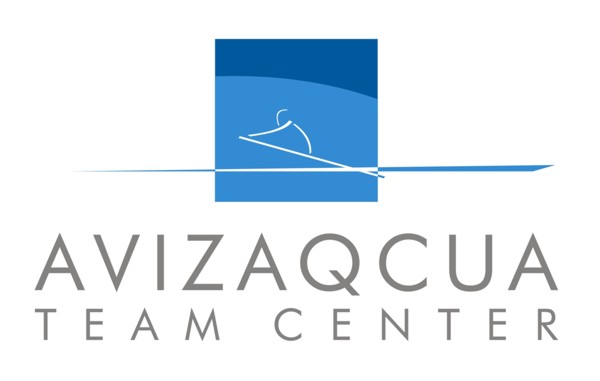